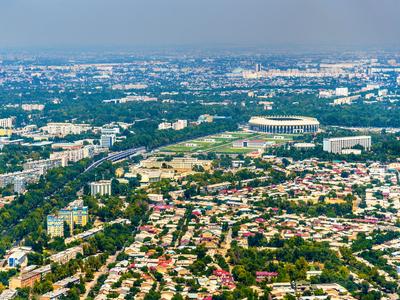 חסרונות: "Sick (flue/high temperature) person was allowed to board the plane. Don't allow sick people on a plane during coronavirus epidemic."

יתרונות: "Yes they was super nice."
חסרונות: "To give tooth brush and tooth paste for the long flight."

יתרונות: "Ok flight, but not happy how customers are being treated in flight."
חסרונות: "No online check in facility via app or web Boarding passes for connecting flight weren't provided at origin. BOM-TAS Nobody attends to the host/ess call button, had to go and get water twice for my coughing wife. TAS-LHR Impolite ground crew in Tashkent. We were provided different seats in different locations for a family of 3 members. Ground crew does don't care attitude."

יתרונות: "I must have chosen business class ($43?) and it was very comfortable. Very short flight but still served a snack."
חסרונות: "Left about an hour late and took a VERY long time to get luggage after arrival."

יתרונות: "Safe flight clean airplane"
חסרונות: "Intertaimnet none of the tv in my row was working:-( no movie game or music for 12 hours of flight"

יתרונות: "Had a very comfortable flight - an overall pleasant experience! However, the food made me bloated :("

חסרונות: "Flight was shaky. Did not feel safe."

יתרונות: "The crew was amazing and super polite!!!"
חסרונות: "The smell on the plane from some passengers ..."

יתרונות: "I am satisfied with my flight to Riga, especially with reservation and booking and smooth flight."
חסרונות: "Lots of noise at the plane."

יתרונות: "Caring about passengers"
חסרונות: "Nothing"

יתרונות: "Non-stop flight, new plane, on time, free checked bag (50 lbs), very thorough security, inexpensive. Lots of legroom and seats recline farther than most coach seats."
חסרונות: "It's kind of like flying the subway. No shades on the windows, very little if any A/C (people were fanning themselves over the Atlantic), lights stayed on for the entire flight, comically surly flight attendants (I gave my water to an old lady bc they wouldn't help her). Took an hour to board bc of security. Didn't recognize a single film, 4 music stations. Cheap and efficient, though."

יתרונות: "They finally have 767 with at seat screens - Riga to JFK - but most movies Russian or Uzbek with extremely poor "English" spoken oven the dialog, not subtitles which would be more enjoyable. Would also be nice to have beer for purchase."

יתרונות: "It was quite pleasant to fly with HY to Bangkok. The service was excellent."
חסרונות: "Due to extra security it took longer to get into boarding area."

יתרונות: "Pleasant non-stop JFK to Riga. Only complaint is no "at seat" screens."

חסרונות: "At the Istanbul airport an item was taken from me for no reason. No regulation was shown for that item to be taken. I wasn’t comfortable with the way I was treated at the airport. The flight was very good"

יתרונות: "It was fine!"
חסרונות: "No problems there... Everything was fairly well organized..."

יתרונות: "Movies"
חסרונות: "Nothing! It’s no comfortable at all!"

חסרונות: "The crew on board was aloof, and somewhat rude. I was traveling with my 87 yr old mother and they did little to help, especially when we needed the restroom but they had the aisle blocked for most of the time, serving food. There was no way to get around to access the bathroom and the crew turned us away from the only available bathroom in the front. Really?! Not impressed at all. Also the flt was 30 minutes late making our connection tight. One of the young, gorgeous stewardesses was rude and dismissive of me when I asked about it."

יתרונות: "Noghing"
חסרונות: "They didnt care about the damages caused to us"

יתרונות: "Free meal and drinkd"
חסרונות: "Flight was delayed but we were not informed of what’s happening Too hot, air conditioning did not work"

חסרונות: "The people at the counter for boarding were not really friendly. the plane was dirty and in my opinion old. It made a lot of noice."

יתרונות: "Will never use kayak again"

חסרונות: "The breakfast was poor & frozen ."

יתרונות: "Not enought time for transit between two flights"
חסרונות: "Two out of three sutecases did not arrive."

יתרונות: "Short flight-everything fine. Great plane."
חסרונות: "Having to pay for internet if you want to use it. The way Israelis queue at the airport, leaving no room between you and them...too much pressure. Strange 'breakfast"."

יתרונות: "I was upgraded to buisnes class :)"
חסרונות: "Every thing was ok"

יתרונות: "Plenty of room for the legs."

חסרונות: "Cramped economy seating, but usual for these days."

יתרונות: "They shipped my dog from Tel Aviv perfectly. No problems."
חסרונות: "The laptops and Ipads are removed from the cabin"

יתרונות: "The staff are all very professional and nice."

יתרונות: "The lost my 1 checked bag of luggage somewhere between tel aviv-istanbul-frankfurt!! Filed a report at Frankfurt Airport but it was filled with all my essentials and some valuables and the airport staff didnt seem to concerned in helping me.... To clarify, my experience through Kayak has been fine! However this whole ordeal has left a very sour taste in my mouth...i still dont have my luggage. They couldnt track it l yet....maybe you can help or forward this message to the appropriate authority. It is extremely important to me :/ Thanks, I still like kayak :) -addam rhodes"
חסרונות: "See literally everything above"

חסרונות: "I flew from Tel Aviv and upon arrival went through security so I could proceed to my departure gate. Then at the departure gate a whole new round of security. There was a priority line, but for some reason I didn't get in it, although I fly business. The line was not that long but it just did not move. And the a/c was not working. Worst boarding experience ever and I've been flying for over 40 years. When I boarded finally I asked if I could give a review and although they said yes- nothing. So I hope someone who cares sees this."

חסרונות: "I was shocked when we landed in Ataturk and the sleeve was attached to the plane we had to get down to the ground from the middle of the sleeve. We were taken to the terminal by bus!! After the sleeve was already attached! I can understand when you are in some small airport or flying with low cost airline. But it's Turkish airlines in their home airport! Really disappointed."

חסרונות: "Movie sound was so poor it was difficult to understand the dialogue."

חסרונות: "AC was not working while we were in the ground"

יתרונות: "Great service."
חסרונות: "Too early to bored and they push you to rush."

יתרונות: "It was an amazing overall experience."
חסרונות: "Would have like to more about boarding gate earlier. But the process flowed very smoothly"

יתרונות: "everything was good and don rhith"

חסרונות: "Security going from venice to Istanbul then israel could have been better"

חסרונות: "My seat space was too small"

יתרונות: "Evry thing but the dilay"
חסרונות: "If we arrive on time"

יתרונות: "I didn't like anything flying with aeroflot plus I didn't received my surfboard case with all my clothes in , I came to a vacation with no bikinis no surfboard no clothes no underwear. Will never fly with you again"

חסרונות: "Felt like small chairs. Big guy set near me, we didnt have place for the hands."

יתרונות: "Friendly and polite crew."
חסרונות: "boarding was outside. My seat was changed by Aeroloft at boarding gate to a seat at back of plane. uncomfortable seat."

יתרונות: "Nice attendance, food"
חסרונות: "I got my suitcase after 4 days"

יתרונות: "Even though there was a significant delay there was recompense for Hotel or fare."

יתרונות: "Everything was perfect except the entertainment."
חסרונות: "There should be a movie screen. There was more than enough time to watch a movie or two."

חסרונות: "There was one economy counter to check in. It took very long"

חסרונות: "Was late Food not good Screrns are so bad"

יתרונות: "Nothing"
חסרונות: "Everything. The horrible customer service i had ever'"

חסרונות: "The food, no wine or beer"

חסרונות: "Everything was better than other airlines I flew."

חסרונות: "It was too hot on the plane"

יתרונות: "Fly was no good"

חסרונות: "I fly business It was great"

חסרונות: "Flight had more then 3 hours delay, "compensation" was a drink. From the begining till the end of the flight we had babies crying."

חסרונות: "There is no reason to wake my small sister, if I've asked not to do so."

חסרונות: "No t.v in the airplane"

חסרונות: "Small plane and no entertainment. Food is bland and meal options not changed for at least 3 months. For a frequent traveller that is bad."

יתרונות: "All was grate!"

יתרונות: "The service"
חסרונות: "The fact that the crew didn't know English"

חסרונות: "plane from tel aviv to moscow could have been better"